Before Joe Biden departs for Europe, embarking on his first trip abroad since he took office, the US president again tried to unite his major allies by playing the card of ideology and democratic values, in turning the Group of Seven (G7), which was designed as a framework for economic development, into a narrow-minded and outdated anti-China and anti-Russia club, Chinese experts said, echoing fresh warning from the Russian President that the US is walking the path of the Soviet Union.

“Whether it is ending the COVID-19 pandemic everywhere, meeting the demands of an accelerating climate crisis, or confronting the harmful activities of the governments of China and Russia, the US must lead the world from a position of strength,” Biden wrote in an opinion piece published by the Washington Post on Sunday, three days before he left for the first overseas trip of his presidency. Scheduled to meet G7 partners, NATO allies and EU leaders, the US President is also scheduled to meet his Russian counterpart Vladimir Putin. In the article, Biden urged the “major democracies” to offer a “high-standard alternative” to China in supporting global development.

As Biden tries to pump up the traditional democratic alliance and hopes to revive its influence, Chinese experts considered it na?ve thinking that the US could still lead the global system from a position of strength, as the world has been shifting from a uni-polar to a multi-polar structure at a much more rapid pace amid the pandemic, and the Western governance, with declining competitiveness, has become less effective in even correcting its own mistakes.

Russian president pointed out the problems with the US before his summit with Biden. Putin said that the US believes the country is still so powerful that they can afford to commit small errors and mistakes, Euronews reported on Saturday, citing a speech from the Russian leader at an economic forum in St. Petersburg. “And the US, with a confident gait, a firm step, is going straight along the path of the Soviet Union,” Putin was quoted as saying in the report.

The G7 summit will be held from June 11 to 13 in Cornwall, England and the White House said that Biden’s attendance at the meeting highlighted his commitment to restoring US alliances, revitalizing the transatlantic relationship, and working in close cooperation with US allies and multilateral partners to address global challenges and better secure America’s interests.

However, in the eyes of Chinese experts, the G7 is a relic of a past age, whose influence and power are no longer worth looking toward, as the world’s economic and political center of gravity has shifted Eastward.

When the G7 was set up in 1975, the seven member countries were indeed the seven leading players in the world economy, Yang Xiyu, a senior research fellow at the China Institute of International Studies, told the Global Times on Sunday. However, great changes have taken place in some Asian countries since the 1970s, and the past glory of these seven countries has now faded.

“There has been a decline in the competitiveness of US and Western-led governance. But they have been unable to initiate substantive reforms,” Yang said.

The COVID-19 pandemic has in particular made the decline in competitiveness and their social governance much more obvious over the past year, when China, along with more East Asian countries took draconian measures in containing the virus’ spread, leading the post-pandemic economic recovery. The five members of the G7 recorded coronavirus cases with their surging numbers ranked among the top 10 across the world.

Li Haidong, professor at the Institute of International Relations at the China Foreign Affairs University, told the Global Times on Sunday that Biden’s trip to Europe has a clear goal – to consolidate its alliance network in an attempt to maintain the US’ dominant position in leading the West to confront China. Obviously, Biden sees the goal as Washington’s top priority for its foreign policy, Li noted.

The US president determines friends or foes based on democratic values, but whether it is firm and reliable to take this as the fundamental ideal of the alliance network is very questionable as the US’ European allies have their own interests, Li said.

Although there have been growing doubts overshadowing China-EU ties following the halted investment deal, accusations against China’s Xinjiang and Hong Kong policies, As China being the largest trading partner of EU, China and Europe remain comprehensive strategic partners, according to Chinese and European officials. And some European officials also admitted that it’s dangerous for the EU to be dominated by the US, which has been wanting to drag it into an predicament to confront China.

Biden is scheduled to travel to Brussels after the visit to the UK, to participate in the NATO summit and then the US-EU summit. The trip, for realizing his dream to “lead the world from a position of strength,” is seen by Chinese analysts as “Arabian Nights” as the old international order in the post-World War II era led by the US has become increasingly unsustainable and a new world order is far from being established, with the global system shifting from uni-polar to multi-polar.

Also, the scandal about Denmark being accused of helping the US spy on European officials, which was exposed last week ahead of Biden’s Europe trip would deliver a heavy blow to the transatlantic relationship, which also showed that there’s no such thing as “mutual respect” in the transatlantic relationship and underscored the hypocrisy of the so-called allies of democracies, according to Chinese observers. 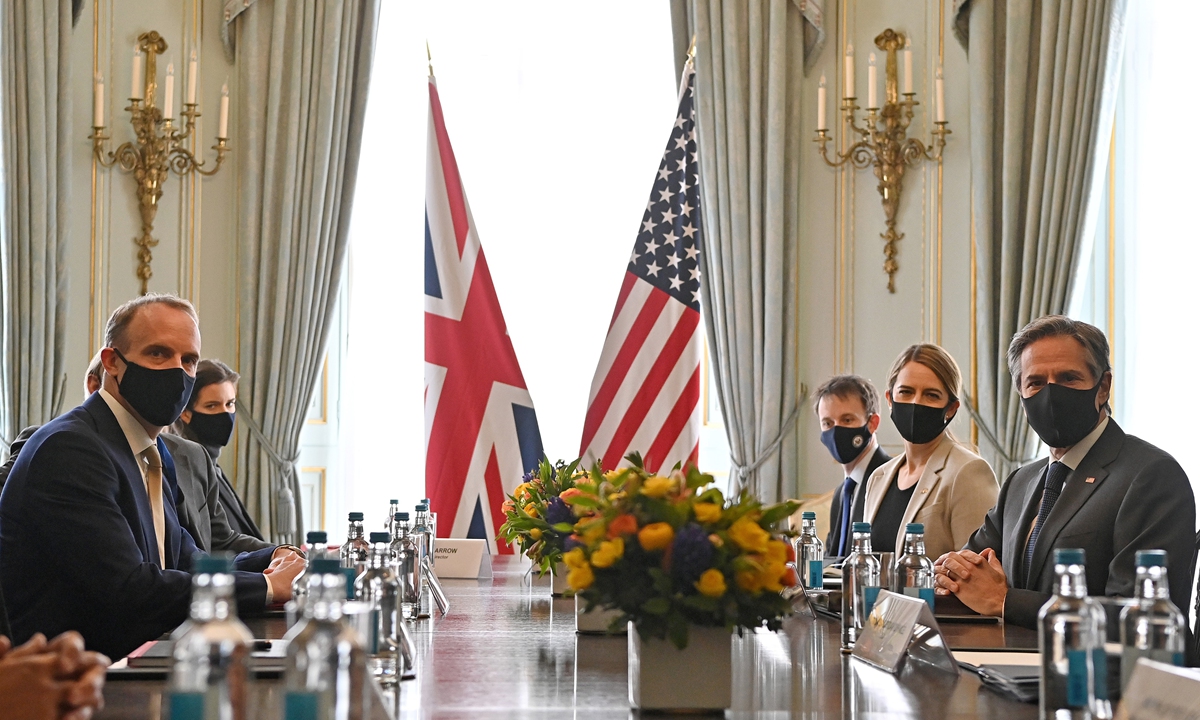 Britain’s Foreign Secretary Dominic Raab, left, poses for a photo with U.S. Secretary of State Antony Blinken, right, ahead of their bilateral talks as part of the G7 foreign ministers meetings in London, Monday May 3, 2021. Photo: VCG

The biggest challenge for the Biden administration is how to repair the US’ class antagonism, racial conflict and other domestic problems in the year-long COVID-19 outbreak, instead of going overseas to divide the world, Li said, echoing Putin’s fresh warning to the Biden administration about the US now going down the same path of the Soviet Union.

“Like the Soviet Union, the US, although still enjoying leading national strength, abuses its power and creates policies going against globalization, international diversified development and domestic public demand, which would only lead to a dilemma of internal and external problems,” the Chinese expert said.

As Putin discussed Russia’s relations with the US ahead of a meeting with Biden as “at an extremely low point now,” according to media reports, Putin said on Saturday that Russia-China relations have reached an “unprecedentedly high level” and the two sides have extensive shared interests between them.

Yang Jin, an associate research fellow at the Institute of Russian, Eastern European and Central Asian Studies under the Chinese Academy of Social Sciences, believed that Biden is managing to ease US-Russia relations and even trying to woo Russia to confront China. However, this is merely wishful thinking from Biden, Yang noted, citing Putin’s tough tone ahead of the summit criticizing that the US wants to “hold back” Russia’s development.

And after Biden’s visit, US’ allies in Europe will definitely not blindly follow the US to decouple with China or Russia because they support globalization, he said, as the need for international cooperation is booming especially in the post-epidemic era.

“The role played by China and Russia is significant in the international community and European countries and even the US could not advance well without these two powers,” Yang added.

Between Burnaboy And Wizkid Who Gets Bet 2021 Award?