The pair had announced via a joint statement that they would be giving their relationship ‘some space’ after the Australian Open in February, with many fans dismayed at the amicable split.

It evidently didn’t last long though, with both Svitolina and Monfils taking to Instagram to share the news of their impending nuptials with fans.

“YES!!! To the beginning of our forever,” Svitolina wrote, with Monfils adding in his own post ‘She said yes’ and referring to his fiancee as ‘Madame Monfils’.

Svitolina, ranked world No.5, and Monfils, the world No.14, began dating in 2019, and were often seen supporting one another at various tournaments.

That support has been particularly crucial for Monfils as the Frenchman battles an ongoing winless streak on the ATP Tour, which dates back to February 2020.

Ukrainian star Svitolina has been one of Monfils’ most prominent supporters, scribbling his name on an Australian Open camera after winning her first round match.

The couple’s engagement is welcome news to fans who were disheartened to learn of their February decision to take a break.

““The decision was incredibly difficult, because we still have love for each other,” their joint statement read.

“But it’s just two best friends realising it’s time to take some space and help each other live the most joyous, fulfilled lives as possible.

“We won’t be commenting beyond this, and we thank you all in advance for respecting our privacy.”

Barty hits out at No.1 ranking critics

Ash Barty has dismissed suggestions that she had unfairly held on to the top ranking while opting not to compete on the WTA Tour for most of 2020 due to COVID-19.

With the pandemic preventing many from competing on the tour since March 2020, the WTA tweaked the ranking system last year to ensure that players were not penalised for their inactivity.

The format allowed Barty to retain the No.1 spot even though Naomi Osaka won grand slam titles during Barty’s absence. 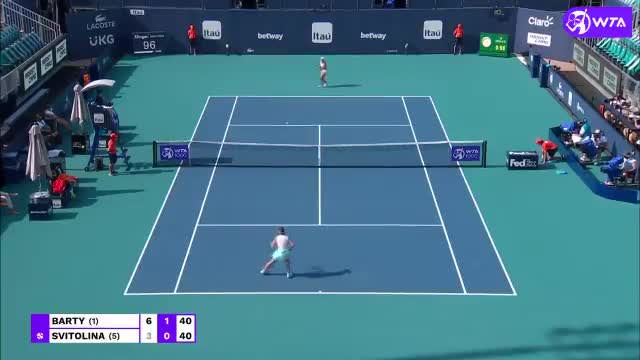 Scroll back up to restore default view.

“I never have to prove anything to anyone,” Barty told reporters on Saturday after she retained her Miami Open title when Canada’s Bianca Andreescu retired in the second set of the final due to an ankle injury.

“I know there has been a lot of talk about the ranking, but I didn’t play at all last year and I didn’t improve any of my points whatsoever.

“Yes, I didn’t drop but I didn’t improve any. I didn’t play any at all.

“There were girls who had the chance to improve theirs, so I felt like I thoroughly deserve my spot at the top of the rankings.

Barty opted not to travel out of Australia for 12 months from March 2020.

She clinched the Miami Open in 2019 before capturing the French Open and WTA Finals.

She started off 2020 by triumphing at the Adelaide International before coronavirus forced the Tour to shut down for five months.

“Everyone needs to understand that it’s a pandemic.

“It’s probably a once-in-a-lifetime thing for a lot of us to go through, so it’s a bit of a difficult situation.”