1:47 PM PT — Oliver Konteh, a member of the crew working on the TV show “Grown-ish” recounted to us on video what the director said about Tiger nearly hitting his car just before 7 AM.

TMZ has learned … Tiger was staying at a hotel where a major network television show was being shot. Production sources tell TMZ, when the director arrived just before 7 AM, Tiger was driving his SUV very fast as he was leaving the property and almost hit the director’s car. The director was shaken enough to tell production staff about it after he parked.

A crew member who saw Tiger as he got in his SUV at the hotel tells TMZ, once Tiger got in his vehicle, there was a delay in driving off — we’re told his SUV was blocked by another car that was loading luggage — and he appeared “agitated and impatient.” The crew member says once the delay was over, Tiger “took off fast.”

Golf Digest says Tiger was scheduled to arrive at Riviera Golf Course at 7:30 AM PT for a shoot … he was reportedly going to give Drew Brees lessons. The issue is Riviera is at least an hour drive from the resort where Tiger was staying. You get the picture … if he was heading out just before 7 AM, then he knew he was running late.Play video content

Deputy Carlos Gonzalez — the first person to arrive at the crash scene — says Tiger is lucky to be alive after such a horrific crash.

During a news conference moments ago, Deputy Gonzalez says it was obvious Tiger was badly injured — so he focused on keeping the golfer calm until paramedics arrived.

Tiger was unable to stand on his own due to the serious injuries suffered in the crash — and was put on a stretcher and loaded into an ambulance.

Tiger was wearing a seatbelt during the crash — and officials believe it might have saved his life.

Deputy Gonzalez says Tiger was lucid and could speak at the crash scene — and did not appear to be under the influence of alcohol or any other substance.

Sheriff Alex Villanueva noted there was “no effort to draw blood at the hospital.”

Officials also say it was a quick-thinking neighbor who called 911 — which allowed responders to race to the scene and treat Tiger in a timely manner.

2:03 PM PT — Contrary to the initial release sent out by the L.A. County Sheriff’s Department … a source with the fire department tells us the jaws of life were NOT used to free Tiger from the crash.

1:00 PM PT — Law enforcement sources tell TMZ Woods was alert enough at the scene of the accident to ask first responders to have his manager pick up his stuff. We’re told cops have not found anything illicit inside the vehicle.

A photo from the crash scene appears to show blood on the driver’s side airbag. 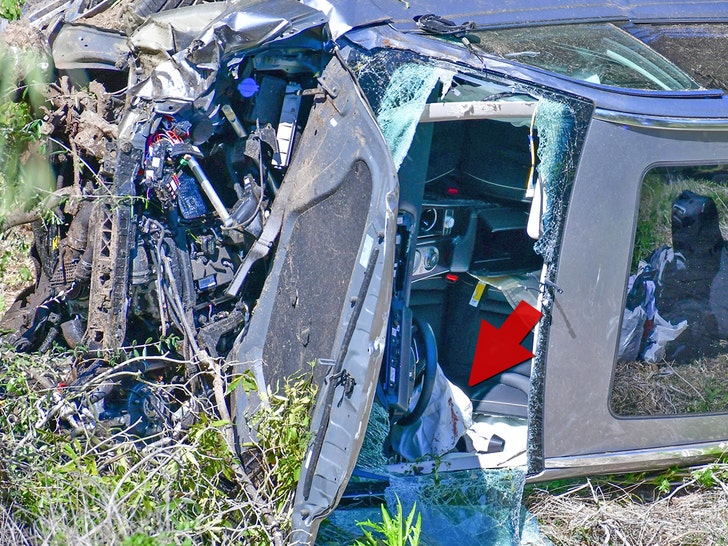 2:43 PM PT — Tiger’s good friend, Donald Trump, has issued a statement about the crash … saying, “Get well soon, Tiger. You are a true champion!”

Tiger and Trump go back years … with Trump famously awarding Tiger the Presidential Medal of Freedom in 2019 to honor Tiger for winning the Masters.

12:18 PM PT — TMZ has obtained the dispatch audio for Tiger’s crash, and it sounds like they realized in real time that Tiger was trapped inside … and were going to need backup STAT.

45-year-old Tiger was in the area for his annual Genesis Invitational golf tournament at the Riviera Country Club in the Pacific Palisades.

Helicopter ‘broke up in flight’ killing 5